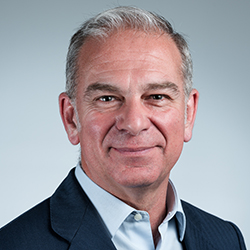 Juan Díaz-Andreu is currently Client Partner at Alexander Hughes Spain, based in Madrid. Works in Clean Technology, Digital, Professional Services, Public/Non Profit/Education, Private Equity, Technology, Media and Telecom
Juan started his career at the Bank of Spain and the Repsol Group. After that, he worked at Banco Santander – Corporate Banking to later join Multitel (Private Equity in Telecom and Internet) and then worked for 10 years in Amadeus IT in of Mergers and Acquisitions, Internal Consulting. Later on, he joined an Executive Search for 8 years to finally become the General Manager of MBIT School, a business school specializing in Big Data, and Artificial Intelligence.
Juan has a degree in Business Administration from CUNEF, Madrid, Spain and has an MBA as a Fulbright scholar from UCLA Anderson School of Management (Los Angeles, CA, USA). He also has graduate studies at Harvard University and IE / Chicago Booth University. Juan has a postgraduate degree in Artificial Intelligence for Business
He is currently a teacher in 7 Business Schools. He speaks Spanish, French, Italian and English. He is a business angel that has invested in numerous technology start-ups in seed capital stages. He is member of Boards of Directors and Advisory Board as Non Executive Director.
Founder and former President of the BoD of the Ryder Club Spain ( www.ryderclubspain.com ) : a Federation of Alumni Clubs of more than 35 North American and European universities (created in 2004). President Emeritus and since 1998 member of the BoD of the “Association J. W. Fulbright Scholars” http://asoc-fulbright.es/ President Emeritus and since 1996 member of the BoD of the UCLA Anderson School MBA Alumni Association https://www.linkedin.com/groups/2498941/ and https://www.facebook.com/groups/uclaaanspain/ Member of the “CUNEF Alumni Board of Directors” (1999-present) www.cunef.edu/alumni and of the “Board of Directors of the Milicia Naval Universitaria” (2000-2003), http://www.mnu.es/
Collaborator of Professor Juan Luna, Chief Curator of the Prado Museum 1986-2019.