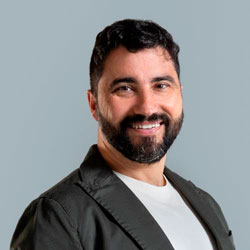 Joaquín Cuenca Abela is co-founder and CEO of Freepik Company, the parent company of world leading design and creativity tools such as Freepik, Flaticon, Slidesgo and Wepik.

Born in Cox (Alicante) in 1976, Joaquín is a Computer Engineer and has a degree in Physics from the Universities of Valencia and Paris-Sud XI, being the 1st of his class in Computer Engineering. He began his professional career in Paris working as a computer engineer and, in parallel, he helped to develop Loquo, a classified ads website that was sold to eBay in 2005. Later on, Joaquín founded Panoramio, the first Spanish company sold to Google, after which he spent 3 years working at Google, in Zurich, as the Tech Lead of Panoramio itself. By 2010, year in which Freepik Company was founded, Joaquín was already living in Málaga.

Joaquín has always been related to the startup and tech ecosystem in the South of Spain and has also founded or cofounded other companies such as PressPeople, Thumbr.io and BeSoccer.

The Scale-Up World Summit
Let's keep in touch!
Sign up to our newsletter and receive regular updates on DES special offers, exhibitors, speakers, activities and more.