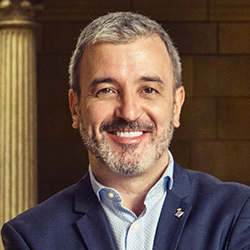 Jaume Collboni Cuadrado (Barcelona, 1969). He is currently the Deputy President of the Municipal Socialist group and the First Deputy Mayor for Economy, Labor, Competitiveness and Finance of the Barcelona City Council.
Previous to that, he acted as the Deputy Mayor for Business, Culture and Innovation between June 2016 and October 2017, and as the Vice President for Social and Economic Development at the Metropolitan Area of Barcelona. Moreover, between 2010 and 2014 he was a deputy in the Parliament of Catalonia.
Jaume also held managing roles at the national level at UGT, and acted as a member of the Economic and Social Council of Spain. He is a lawyer by profession, degree that he studied at the University of Barcelona.
After the municipal elections of May 26th, 2019 and as a result of a left-wing coalitionn at the Barcelona City Council, he is acting as the First Deputy Mayor of the Barcelona City Council.

The Scale-Up World Summit
Let's keep in touch!
Sign up to our newsletter and receive regular updates on DES special offers, exhibitors, speakers, activities and more.