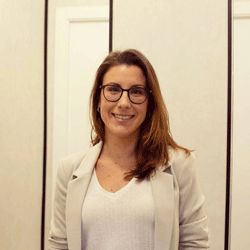 Young entrepreneur, CEO and co-founder of Genengine, graduated in health engineering and specialized in bioinformatics from the University of Malaga. With postgraduate studies as a university expert in genomic medicine and cancer genetics and an MBA.
Her professional career began during her degree with a research grant for two years, participating in an R&D project for the application of semantics and Big Data in the clinical interpretation of genetic findings by NGS techniques.
In 2017 she became part of a UMA spin-off entrepreneurial project that shortly after she became the leader, co-founding Genengine in 2018: a bioinformatics startup whose objective is to digitize and optimize processes in the genetic-clinical field. Its activity focuses on the design and development of innovative solutions that support decision-making in the areas of rare diseases and oncology.
Genengine was selected by Telefónica’s Open Future startups accelerator program and obtained early-stage private investment, which allowed it to validate the market and develop its first product: RDengine, a decision support system for the genetic diagnosis of rare diseases. In 2019, this solution won the Telefónica award for innovative product at Telecommunications Night.
During her short professional career, she has obtained the following recognitions: Leading Women Entrepreneurs in Spain 2020 (El Referente), Leading Women of the 21st Century (ICT Innovators, Cibervoluntarios Foundation), Leading Women of Innovative Entrepreneurship Guide (High Commissioner for Spain Entrepreneurial Nation , Government of Spain).
Since 2021 she is a mentor in the OurSteamJourney project (mentorship for women in tech) an she has also been a member of the GDG (Google Developers Group) community for 5 years, collaborating in the organization of events and being a speaker at two editions of the Women Techmakers Malaga event.