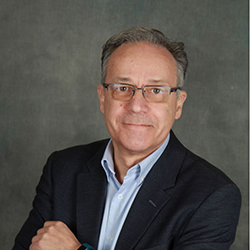 Alfonso Diez, BS in Mathematics. During the past century he developed his career as consultant and technologist in large companies (Arthur Andersen, Citibank, Caixabank, etc. and later on he became an entrepreneur. He has been working in the edges of the Organization, Engineering and Information Technologies, in the field of Digitalization and Application Platforms. Since 2010 he has specialized in the field of Cognitive Systems and Semantic Digital Twins, with great success.